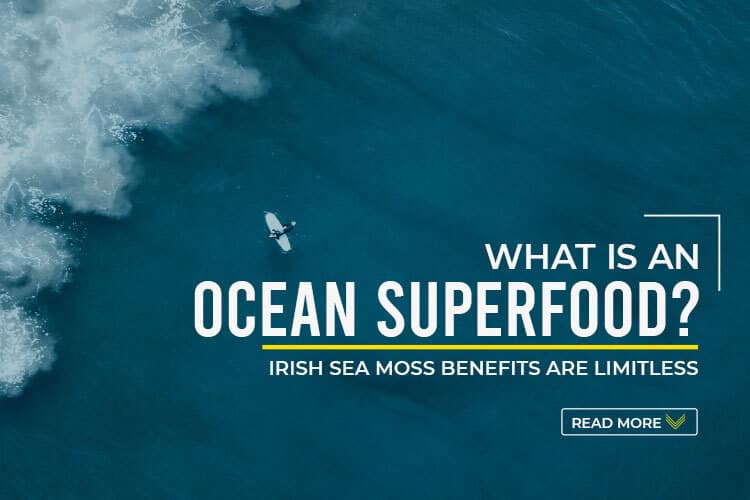 Irish sea moss benefits are limitless. This plant is not very known to the non-coastal areas but it has tons of benefits.  What is sea moss?  Irish sea moss is by nature a red alga and is local to the coastal areas. In the early 19th century, this wonder-food was a popular elixir and medical source for the Irish and the Jamaican. It is even noted that sea moss helped the people survive during famine. Although it has not been very popular in the current generation, it cannot deny the reality that Irish sea moss is practically a superfood. [1][2]

Various studies claim that the human body has around 103 trace minerals found in the body.  Trace minerals are also called microminerals because they are essential minerals (which means they are taken from a food source) but are required in smaller but consistent amounts [3].

Minerals found in sea moss are on-point very comprehensive. With all the vitamin and mineral requirements of the body, it is not easy to complete the requirement. Amazingly, sea moss, like the real wildcrafted sea moss of earthbal.com, actually has 92 of these 103 trace minerals that the body needs. This solves a whole lot of effort for people in getting their daily requirement.

Imagine a single whole food that is naturally packed with a mineral punch like no other. That’s what you’re getting here in this one marine vegetable. Almost every mineral you’ll require for optimal nutritional support and better health.

Organic is the Way

Several food supplements have also emerged with the increasing need for a sustainable life but, if not most, have varying impacts on the body because they are not from where they should be. That is to say that they aren’t organic (sometimes referred to as being soluble) compounds.

Take for example the silver content in sea moss. This is an “organified” soluble form of silver that can assimilate with the human body. While solubles can have side effects, sea moss- especially the non-GMO, have minimal side effects.

Make It Whole and Clean

By having a whole food source of minerals you are more likely to keep illness at bay.

When you get right down to it, the disease is little more than the result of a disconnection from what is given to us in nature. So to combat or reverse symptoms related to disease we would be wise to make whole foods a bigger part of our routine.

Besides, Irish Sea moss is an electric food known to have alkaline properties. An alkaline diet consists of whole plant-based foods that increase the oxygen content in the body. Our bodies are naturally alkaline, but if the food you’re consuming is highly acidic, then the body becomes more acidic. This is when diseases start to form in the body.

Sea moss has been extensively studied over the years and has shown significant health benefits.  Dr. Sebi, a known natural healer quotes “God Made sea moss and it does everything.”  Because of the essentially unlimited benefits of sea moss, here is a  short but intrinsic sea moss benefits list for you.

Another sea moss benefit is directed to the Thyroid gland. The gland is important in the management of hormones.  Two main hormones the thyroid is responsible for managing are Thyroxine and Triiodothyronine, which consequently are essential in weight regulation, brain function, and heart development. [4]

Functions of the Thyroid

The thyroid gland may be small but it is paramount to a healthy and effective function of the:

A healthy functioning thyroid is also a crucial necessity for the development of unborn children. Likewise, When your thyroid is not functioning well, there is the risk of hypothyroidism (an under-active thyroid) or hyperthyroidism (an overactive thyroid). Thyroid disorders that are left untreated can develop into more complicated issues including autoimmune diseases.

If you hadn’t guessed, in most cases where people suffer from thyroid problems these are typical to an iodine deficiency.

Iodine is a Real Deal

The iodine from seaweed is critical in supporting an effective thyroid function.

It is in the mixing of iodine, which had been absorbed by the thyroid, with tyrosine that makes the key hormones Thyroxine and Triiodothyronine.

A good amount of iodine in sea moss benefits the thyroid gland. Making seaweed a part of your daily diet will do much to support having a healthy and functioning thyroid. This is one of the keys to improving your overall health.

Aside from Iodine, sea moss is also a source of many other vitamins, minerals, and essential fatty acids.

Read Article: What is the Most Nutritious Plant in the World? Sea Moss or Bladderwrack

2. Improve your Metabolism with Sea Moss

As mentioned one of sea moss benefits is its effect on the thyroid, and its role in BMR maintenance, which affects how well the body processes calories, which ultimately impacts an individual’s weight.

With the organic Fucoxanthin found in sea moss,  more research has been looking at the fat burning property of it which is found in sea moss. The naturally derived plant-based Fucoxanthin prevents the growth of fatty tissues and reduces abdominal fat. Just like how Irish Sea Moss is known as an appetite suppressant.

Another, due to the high mineral content, you may find that you won’t need to eat much food to complete your daily requirement. Earthbal.com suggests that by eating Irish sea moss, 92 micronutrients can be infused into your diet.

A lower calorie intake ultimately leads to weight loss. It may also help to reduce or even eliminate cravings for processed foods, trans (bad) fats, sweet foods, and caffeine. The best method for sustainable weight loss is consuming a whole food plant-based diet and increasing your physical activity.

Including sea moss in the daily diet can guarantee a good amount of the following nutrients in the system among the many others that can be associated with a reduction of the risks associated with heart disease:

This is just a peek at the powerhouse that sea moss is when it comes to supporting heart health. The few listed are effects of sea moss to the body, especially the heart when taken long-term:

There is a long history of the use of sea moss as an anti-inflammatory agent and antibiotic. A popular natural cough remedy-“Irish Moss”, actually originated from Irish sea moss

Sea moss is a full-load natural remedy to minor and even some major diseases. A Naturopath would highly recommend taking sea moss to help treat sore throats, chest coughs, tuberculosis, bronchial infections, and pneumonia. It is the unquestionable go-to for many.

But its healing property does not end there.

There is more good news from sea moss especially for those that are suffering from leaky gut, ulcers, gastritis, indigestion, and constipation. Sea moss also helps good gut bacteria thrive as it makes for a great food source.

Indeed there is more to learn about sea moss. Naturally, sea moss also helps by lining the intestines with probiotics. The best way the benefit of sea moss to the digestive system is that the mucilaginous properties of the sea moss give the bowels a slippery, almost soapy lining which helps waste moving through your body to pass easily.

Its anti-inflammatory properties are great for an irritated bowel and help to heal gut-related issues. Swelling, inflammation, and discomfort have been reported to greatly reduce when sea moss gel is regularly consumed. It’s also a great compliment to a fasting protocol.

Healthier life essentially radiates to better-looking skin, hair, and nails. Sea moss is not just to be eaten, it can also be turned into gels which is very helpful in keeping the skin healthy and well. Irish sea moss is a generous source of vitamins and minerals which help in strengthening your connective tissues.  It is packed with collagen which helps improve the elasticity of the skin, making it look fuller and wrinkle-free. [6]

Natural sea moss in the diet and as topical applications are far better than synthetic creams in nourishing the skin. Eating seaweed every day, the minerals are absorbed from the inside out. All these benefits enhance the matrix in the hair, skin, and nails will start to regenerate from the inside out. More so, because of the natural component of sea moss, it is absorbed by the body faster than other skincare products. [7]

As a drawing agent, the sea moss draws out toxins and replenishes it with good minerals. The antibacterial, antimicrobial, antiviral, and anti-inflammation properties all play their part in healing the skin naturally. No need for scientifically formulated concoctions, just mother nature’s love.

It may sound fishy at first, but it’s not! Irish sea moss bath is the best revitalizing bath you can have. This is great for all kinds of skin conditions. It’s suitable for sensitive skin types, sunburn, acne, eczema, dermatitis, and psoriasis.

Aside from looking young and vital, a strong body is also an added recipe to a healthy lifestyle. But who likes having sore muscles? No matter what your fitness level is, from beginner to professional athlete, Irish sea moss provides many benefits in helping you get stronger. From post-workout recovery to minerals replacement that you need to perform your activities.

Sea moss is made up of collagen proteins that strengthen and repairs the connective tissues. The anti-inflammatory properties of sea moss help the body recover quickly after a workout. If you experience joint and or muscle pain, it will also provide relief and lubricate the joints.

As we’ve already discussed, the primary benefits of sea moss are due to all the minerals and nutrients it contains. Zinc is one of the minerals recommended for a healthy reproductive system. It helps promote healthy libido and stimulation. It also improves blood circulation through the body which eventually improves stamina. The complex libido mechanism of the body is essentially conquered by the benefits of Irish Sea moss.

Side Effects of Sea Moss

There are practically little to no side effects recorded of Irish sea moss if taken in the proper amount. Although it is as suggested, a consultation from a medical professional is still recommended for optimal results.