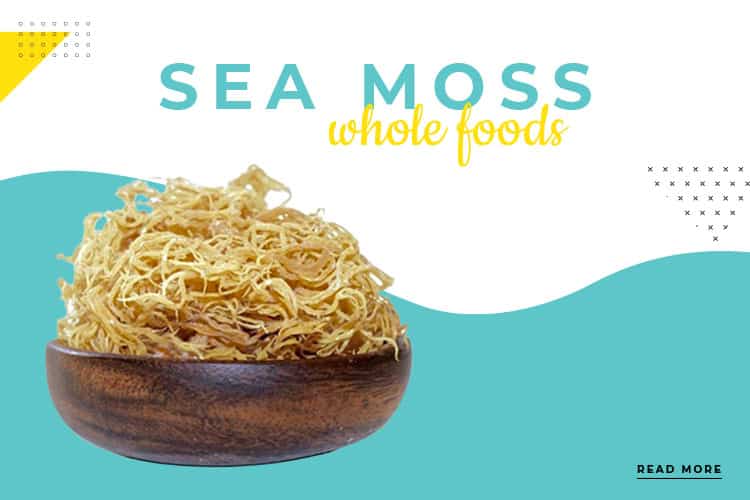 What are Whole Foods?

Sea Moss Whole Foods? While it remains a challenge to distinguish what is a whole food from other food, the simplest explanation for whole food is that Whole foods are those foods that are still or remain close to their natural form. These are foods that have not been processed or manufactured. Whole foods can be identified because they are not synthetic, and have less or no preservatives when packed.  [1]

Whole foods are always packed with natural nutrients. Almost all the vitamins, minerals, and even fibers are preserved in their freshest form. Many people nowadays are slowly transitioning from processed foods to whole foods because of the benefits it provides.

Not only can people get the most out of every bit of food they take, but whole foods also lessen the risks of developing certain diseases associated with preservatives and synthetic chemicals.

Dr. Sebi is a naturalist, pathologist, herbalist, and natural biochemist. Dr. Sebi is popular for his advocacy of natural foods. He is keen on healing the body with herbs and natural ways. In many of his research, Dr. Sebi promotes that in reversing pathologies in the human body, one must consume life-which is good and natural food. He also points out that most diseases exist because the human body becomes too acidic. This is further supported by the biochemical reasoning on acid-base. He said, “Only consistent use of natural botanical remedies will effectively cleanse and detoxify a diseased body, reversing it to its intended alkaline state.”.

He further explained that only through intra-cellular detox can the cells in the body be purified. It needs to rebuild its environment to improve its condition.

Dr. Sebi emphasizes that “One must consume life – not Death – to maintain and sustain oneself.”

Over time, several naturalist approaches have been established with the help of Dr. Sebi’s methodology. One popularized superfood among the few is the sea moss.

r. Sebi greatly promotes sea moss as a food that helps him still be in shape even at his age. He advocates the benefits of this whole food. According to him, sea moss is filled with vitamins and minerals. It is packed with calcium that at his age he can fall on his knees not feel anything.

With that, let’s get to know more about this whole food sea moss.

Sea moss or Irish sea moss is scientifically known as Chondrus crispus has been popularized lately because of Dr. Sebi’s research and several new claims on it. Among many, sea moss is beneficial to thyroid health. It is also helpful to the mental health and metabolic functions of the body.

Some of the nutrients in Irish sea moss are listed here.

Irish sea moss is the to-go food source for collagen. Collagen is responsible for maintaining the elasticity of the skin and connective tissues,  making the skin look younger and fuller. It also helps in maintaining bone health.  [3] It is packed with a good number of collagen that is a primary source of dietary collagen for a vegan diet. Raw sea moss or rehydrated Irish sea moss is the most nutritious and collagen-rich kind of sea moss in the market.  [4]

All these benefits enhance the matrix in the hair, skin, and nails will start to regenerate from the inside out. More so, because of the natural component of sea moss, it is absorbed by the body faster than other skincare products. [5]

Irish sea moss has 10g of fibers per 100g. This amount of fiber daily can help sweep the colon and maintain a healthy absorption of nutrients. Sea moss, with its other properties, is a great aid in maintaining the normal peristalsis of the colon. It is also helpful in making sure that the mucus level is controlled throughout the digestive tract, especially in the intestines.

Research on Fucoxanthin claims that it is a good non-stimulatory fat loss agent. Fucoxanthin has a good amount in sea moss. Fucoxanthin, a natural carotene enters the fats cell and stays there for a while. The study claims that fucoxanthin induces fat loss while inhibiting fat cell differentiation and proliferation.  [6]

Other than that fucoxanthin also corrects glucose metabolism abnormalities found in muscle tissue. This will eventually result in less risk of acquiring diabetes. There is also a possible correlation with a reduced level of cholesterol. A healthier liver has also been recorded. [7]

Alkaline foods are foods that can help you alter your body’s pH. The body has been identified to be acidic due to several acidic foods in the diet. How can food affect the pH of the body? It is due to the metabolic waste of the food taken in the body. If you take more acidic foods, metabolic waste can be more acidic and can lead to other diseases. [8]

At normal, the pH of alkaline ranges from 7.1–14.0. Although some parts of the body may naturally be acidic like the stomach, due to its function, the blood on the other hand should not be too acidic as it may lead to acidosis. Thus a good amount of alkaline food is essential to balance the pH of the body.

On a normal daily function, the body necessarily needs 102 micronutrients. 92 of these trace minerals are available in sea moss at a sustainable amount. To be able to get 92 out of 102 is already a big relief because you basically, almost meet your daily nutritional needs without having to think so much about how to meet them. Earthbal wildcrafted Irish sea moss is the very example of this natural whole food. Their naturally prepared Irish sea moss is guaranteed to have preserved these 92 nutrients.

Irish sea moss has been identified to be very helpful to the thyroid gland and the primary reason is the good amount of iodine in sea moss. Its abundant iodine greatly helps the daily function of the thyroid. However, iodine should be taken in moderation because of the possible effect on people with a high risk of acquiring hyperthyroidism.

A hundred grams of sea moss can give 68 percent of the daily requirement for iron. Iron is essential to the body because it is the primary molecule that helps in the transport of oxygen from the lungs to other tissues of the body. A lack of iron can result in anemia.

41% of the recommended daily nutrient of magnesium is provided by 100g of Irish sea moss. Magnesium is essential to more than 300 enzyme functions in the body. It is especially necessary for muscle functions. [9] Magnesium also affects nerve function and has a significant effect on blood pressure regulation.

Zinc also plays a good part in maintaining the immune system. A deficiency in zinc in the body can lead to a lack of attention, weak immunity, allergies, thinning hair, and even a leaky gut. While there are many zinc supplements, research claims that zinc is best absorbed through the diet, especially from whole foods. A good quality Irish sea moss is also a good source of dietary zinc.

Irish sea moss is a good source of vitamin B especially for Folate (B9) and Riboflavin (B2). Essentially, different variants of Vitamin B are required by the body to help break down proteins, carbohydrates, and fats. Folate is very important in the form of folic acid for pregnant women and developing neonates. It is also necessary for the creation of red blood cells in the body.

The benefits of Irish sea moss decades ago was just limited to being a cough expectorant and elixir for libido functions. However, it was later researched to have more benefits that it became a hit to many as an ocean superfood and whole food.

Among the many benefits of sea moss, it is known to help in maintaining a healthy body through:

Further, sea moss, more specifically raw Irish sea moss is identified to be super-packed with nutrients. It is filled with different trace minerals and vitamins which are essential to running the body effectively. Further, these minerals are also helpful in revitalizing the body internally which can result in better intracellular functions.

Irish Sea Moss is also classified as whole food because most of how it is prepared retains its full nutrients. Wildcrafted Irish sea moss, like those from Earthbal, is certified non-GMO, with no gluten in it. More so,  naturally, sun-dried sea moss is certified to have kept its full nutrients as compared to other forms of sea moss.

Sun-Dried sea moss is naturally processed, and not baked. Sundried Irish sea moss is prepared naturally which ensures no artificial dehydration happens nor any chemical treatment. When sea moss is baked or cooked, it loses its nutrients because the sea moss is stripped of its properties.

Naturally dried Irish sea moss also ensures the rawness of sea moss after it is rehydrated. Likewise, processed sea moss, like through extraction and acid treatment, has degraded carrageenan. Degraded carrageenan is also known as poligeenan which is heavily studied to post a health hazard. Poligeenan is a primary inflammatory polysaccharide. [10]

Sea Moss Available in the Market

With the hype of sea moss in the raw and whole foods market, there is a variety of sea moss sold in the market. However, it should always be remembered that the freshest is the healthiest.

These are the available sea moss forms in the market.

This is the freshest version. However, since sea moss also has a short life this form is often just available near the local source of sea moss.

Dried sea moss is the form in which most sea mosses are sold in the market. However, not all dried sea moss is healthy. One should always be aware of how the sea moss was processed. Always avoid acid-treated sea moss because it contains harmful carrageenan.

Irish Sea Moss powder is another readily available form in the market. This is popularly used as a thickening agent for cooking. Many vegan foods also use this for their baked goods because of its natural thickening property. However, like dried sea moss, powdered sea moss may also be artificially prepared. Hence, can be harmful

Instead of choosing just any powdered sea moss, buy sea moss that has been derived from naturally dried sea moss. This way, nutrients and proteins in the sea moss which is helpful for the body are still in their natural form and not denatured.

Sea moss in capsule or pills form is usually the cheapest in the market. Pills or capsules offer an accurate dosage delivery method in an easily administered package. More so, this form can be more concentrated and be made with additives.

Sea moss gel is available in the market as both edible and topical.  It is usually used as thickeners for many recipes without added calories. Aside from food thickeners and additives, sea moss is also a good natural face mask because of its natural collagen. Sea moss gel likewise has a good absorption rate because of its natural properties. Check out the sea moss gell recipe at the end of this article to Irish sea moss powder

How to Make Sea Moss Gel

Irish sea moss gel is very versatile. This can be used for a topical mask or different types of dishes. It is also good for hair treatment. It is easy to make and very easy to store. Some of the uses of sea moss gel are [11]:

Besides, sea moss gel can last for 3 to 4 weeks in the refrigerator and 3 to 6 months if stored in the freezer.

What you need for a good Irish sea moss gel.

As simple as this, you can make a nutritious and versatile sea moss gel.

Note: Make sure not to use tap water as it may contain impurities