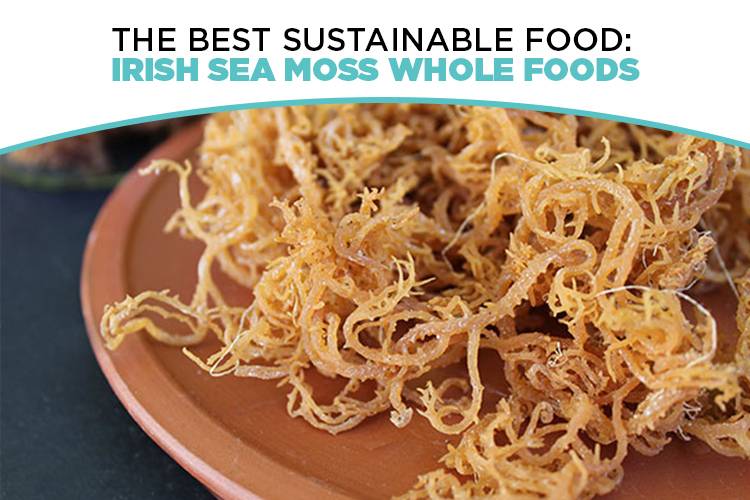 Irish Sea Moss Whole Foods is currently a growing industry. The sea moss industry has been growing over the years because of the increasing demand for sea moss products. Further, there is a growing demand for a more sustainable and more environmental approach to eating. Even top companies like McDonald’s have been catering to this demand.

Sea moss aside from its health benefits like its positive effect on the heart, thyroid and the brain, is one of the best meat substitutes because of its natural property like the carrageenan, making the food very juicy. Sea moss is a much better option than other starchy meat substitutes.

Is Sea Moss A New Discovery?

Technically no. Sea moss is prevalent in the eastern part of the world. It is, in fact, a staple product. However, Irish sea moss to be exact has only gained popularity for a few years in the American market. Before it became popular in the market, Irish sea moss served as a food for many Irish locals and other communities near the Atlantic ocean’s shores.

Irish sea moss is those found in either the cold shores of northern Atlantic or the warmer beaches of the Caribbean. Although it has been more hyped than before, sea moss has been regarded (anecdotally) as a health elixir (anecdotally).

Sea moss is not a new discovery, but it is an emerging new technology. Sea moss farming is a well-promoted sustainable farming method because of many environmental consumer demands imposed globally. 1

Sea moss is the best product to be agriculturally grown because it is easy to make and generous in amount. Sea moss also serves as a habitat for more sustainable food options like crustaceans and fishes.

There are just a million different type of algae from the microscopic to many feet long. Like sea moss, Algae is also found that algae provide for almost 80% of the oxygen in the earth.

Irish sea moss whole foods are not just healthy for the body but also for the environment.

What Is Whole Food?

A whole food diet has taken over the world because of the pressure to live a healthier lifestyle. Many people are taking a more conscious effort to eat at most only whole foods.

Whole food is not a specific set of food category but a state at which the food is taken in. A naturally grown, non-GMO, gluten-free apple is a whole food; but a similar apple made into a jam, or a spread may not be considered a whole food.

A whole food diet is taking in food at its most basic level with the minimum amount of process. Many markets are already considering this diet. They are now including more whole food options in their stores.

This is also how sea moss made it into the whole foods category. Irish sea moss whole foods are sea moss that is usually naturally dehydrated and packed as is. People can just take a packet and rehydrate the sea moss. After rehydration, there is not much difference to a newly harvested sea moss.

Is there a thing as Irish sea moss whole foods? Yes, because sea moss is usually packed at its most basic form. It is just sun-dried or naturally dehydrated. Throughout the natural process, the sea moss retains almost all its nutrients.

Rehydrating sea moss through soaking allows sea moss to return to its freshest state. Irish sea moss whole foods can be eaten as it is. It can also be used as a smoothie additive and food additive.

By adding Irish sea moss whole foods to dishes, the dish can get a good nutrient boost.

Whole food easting is goal-oriented. It sets a goal to how much cleansing you will need and how much you are willing to maintain.

Whole foods diet is very sustainable because whole food diet is not a restrictive diet. It is about being more conscious of the type and the source of the foods being eaten. Whole foods can also help the body to achieve its best state because it is void of toxic chemicals that processed foods have.

Sea moss not only boosts the metabolism, improves heart health and cognitive brain capacity, but also saves the environment. Irish sea moss whole foods is a sustainable solution for a healthier living. Adding sea moss to the dishes can boost the nutrients in the meal.

Growing sea moss improves the earth’s oxygen level; it also provides a temporary shelter to some sea creatures. Sea moss farming is also sustainable. It does not require fertilizers to grow, and it does not need to erode the land—simply earth-saving.