What Is The Most Nutritious Plant In The World? Sea Moss Or Bladderwrack 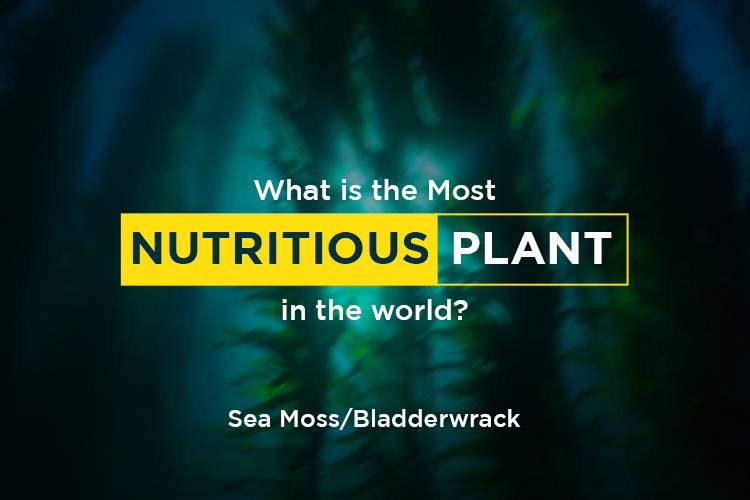 What Is The Most Nutritious Plant In The World? Sea Moss Or Bladderwrack

Most Nutritious Plant in the World

While many are going into healthier and more sustainable diets, there are still many questions on what food is better over the other. There are also questions on the safety of the foods and their effect on the body. Today we are going to answer some of your questions.

While it is popularized because of the dynamic diets currently available and because of the growing reputation of Dr. Sebi’s diet, sea moss and bladderwrack were used medically even in the 19th century. Sea moss was recorded as an expectorant and elixir for libido as early as the 19th century. Same as Bladderwrack which was first identified to help in weight management and great support for the endocrine system.

Sea moss or specifically Irish sea moss is a plant under the family of red alga. Irish sea moss scientifically known as Chondrus Crispus is a local of the shores of the Atlantic Ocean. While many sea mosses can be found in different oceans in the world, Irish sea moss is only found on coastlines of Europe, North America, and the Caribbean Islands.[1]

Irish sea moss is more popular than it was before because of growing interest centered on it. Dr. Sebi, a naturalist, is a dedicated promoter of this wonder food. Irish moss is also one of the favorites of many people that have a vegan diet.

Because of its versatility, sea moss is essentially used in different types of things. From food thickeners, teas, fruit jam base, soup, and dressings, to even gels and daily supplement. There are just limitless things you can do with sea moss. Although there is a list of uses of sea moss, raw wildcrafted Irish sea moss is still the best and the most nutritious.

A shortlist of benefits of sea moss:

Read Blog: What Are the Side Effects of Sea Moss? Differentiating Carrageenan from Poligeenan

Bladderwrack, the same as sea moss, is popularized again after several years because of the growing demand for whole foods. Bladderwrack is a brown alga scientifically Fucus vesiculosus. Bladderwrack can be found in the pacific ocean and Atlantic ocean. Some bladderwrack can also be harvested from the baltic sea but in smaller quantities than those from the mentioned.  [2]

Bladderwrack is a far cry from bladderwort that we also know of. It is more commonly known as black-tang, sea oak, sea spirit, and rockweed. While discovered almost at the same time as sea moss, bladderwrack was used in the 19th century as a medicinal herb to treat goiter as compared to sea moss elixir as an expectorant.

A shortlist of benefits of bladderwrack:

What are the benefits of Sea Moss vs Bladderwrack?

We know that sea moss and bladderwrack are helpful to the body but let’s undertake a more detailed comparison of the two.

Irish sea moss benefits are very helpful to metabolism because of its effect on the thyroid glands. The effect is provided by its abundant source iodine which is a primary ingredient to process T3 and T4.

Same as Irish sea moss, Bladderwrack is also identified to have an abundant iodine content. Which is also researched to help the thyroid function. In the research conducted by Felter and Lloyd in the late 19th century, they have seen the effect of bladderwrack on the system endocrine system. [3]

Like many ocean foods, sea moss and bladderwrack are a good source of iodine for the body. Both also help in thyroid health and consequently helps the metabolism, brain functions, and other muscle movements.

While fucoxanthin and fucoidan are both in the sea moss family, they are sourced in different parts. Fucoxanthin is a type of carotenoid known as a xanthophyll while fucoidan is the sulfated polysaccharide in the plant. Both of these molecules are found to have anti-inflammatory and antioxidant properties.

Research also proposes its anti-cancer, and pain-fighting properties, to the possibility of improving vision through neovascularization. [4] The difference between the two is their uses. Fucoxanthin is useful as a weight-reducing agent and helps in improving blood lipid profiles while fucoidan is useful as an ingredient in dietary supplements.

Both sea moss and bladderwrack are helpful to brain functions through its effect on the thyroid. Their minerals are also essential in making body activity more effective. With abundant iodine from these two, T4 is converted from iodine variety and thyroid peroxidase enzyme in the follicular laminae of the thyroid gland.

Both sea moss and bladder helps the thyroid to function better. As a consequence, the metabolism of the body is also more efficient in its process. With sea moss, the body gets 92 micronutrients out of the necessary 102 nutrients. Moreover, Irish sea moss also provides good aid to digestion with its natural probiotic and fucoxanthin property.

Read Blog: What is an Ocean Superfood? Irish Sea Moss Benefits are limitless

Sea moss is also helpful in weight management because the body system is working at its optimal when it receives proper nutrition. Sea moss is researched to have 10g of fibers in every 100g consumption of raw sea moss.

Similarly, bladderwrack shows a good result with weight management. Several studies explain the effect of bladderwrack to effective digestion. It also helps in bowel movement. It is also an important ingredient for many dietary supplements.

At the cellular level, fucoxanthin in Irish sea moss helps prevent the aging of cells while also promoting adequate phagocytosis. In a more scientific approach, fucoxanthin is an inducer of the G1 stage in cell-cycle arrest. It helps regulate cell apoptosis which is essential for healthy cell division. While Bladderwrack is a more effective antioxidant and anti glycemic. These two help the cell to function properly, preventing premature death.[5]

Further, both Irish sea moss and bladderwrack are collagen-rich foods. This is essential in ensuring the elasticity of the skin and connective tissues. A good and healthy skin prevents the skin from developing wrinkles.

Which helps maintain a healthy heart function. It is also helpful in maintaining the proper rhythm of the heart.

On the other hand, bladderwrack is known to help the cardiovascular system through its high level of High-Density Lipoprotein (HDL) content which is “good cholesterol. HDL is a carrier of metabolites to the liver and helps clean the blood and pathways. Having high HDL decreases the risk of developing atherosclerosis and heart diseases.

Irish sea moss is filled with vitamins and minerals for the body to function well. Each vitamin or mineral helps keep the body away from diseases and in developing stronger immunity. Among the many other properties of sea moss, We have listed some essential properties that help the immune system:

Similarly,  bladderwrack also improves the immune system especially when we have an effective thyroid activity. Further, bladderwrack is rich in vitamin A which is essential for the production of White blood cells in the body. And consequently also the primary element for immunity.

Most Nutritious Plant in the World

In summary, Irish sea moss and bladderwrack do not disappoint in being labeled as a superfood. Not only are they packed with iodine but they also carry a multitude of nutrients that are essential for the body.

It is tough to decide between sea moss and bladderwrack which plant is the most nutritious because both have their advantages and disadvantages.