4 Amazing Uses Of Sea Moss: How To Use Irish Moss Powder 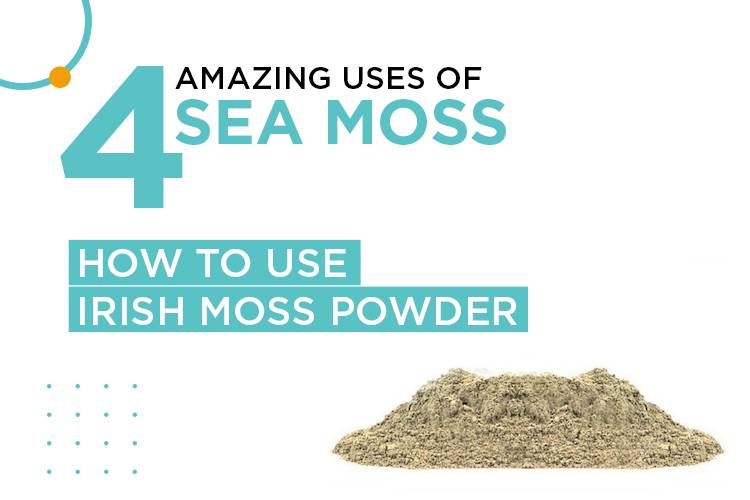 4 Amazing Uses Of Sea Moss: How To Use Irish Moss Powder

What Is Irish Moss?

How to use Irish moss powder? Irish moss is a popular superfood. It is scientifically called Chondrus crispus. Irish moss has gathered attention recently because of its benefits to the body. It is mostly sourced from the shores of the Atlantic. Since the late 1800s, sea moss has already been used by the Irish people for cough treatment.

Did you also know that even before many foods became a staple for the Irish people, sea moss was once their primary food source? During the potato famine, they discovered this fantastic ocean food by the rocky shores of the Atlantic.

Although it ceased to be a staple now, it is still known to many. It was even brought by the English to their colonies. Thus, the many confusion between the Jamaican Sea Moss and the Irish Sea Moss is called Irish Moss. If you want to know more about the difference, check on this link.

Location wise, Jamaican sea moss grows in warmer waters and is more abundant than the Irish sea moss produced in the colder and northern part of the Atlantic Ocean. Although they are different species, both have similar nutritional value and essentially helpful to the body.

What Makes Sea Moss A Superfood?

Sea moss is full of nutrients that can be considered a superfood. Sea moss has these top 3 benefits:

These three main benefits of sea moss ripple its effect on the body’s other functions. This includes muscle coordinations, brain functions, and even endocrine activities.

Naturally prepared sea moss, like those sundried or naturally dehydrated, has retained its full nutrients. Sea moss is not just labeled “superfood”; it is literally one. It is also a whole food because of how prepared and how it has kept all its vitamins and minerals.

What’s more, sea moss is vegan approved because it is gluten-free. Wildcrafted sea moss-like those of Earthbal are indeed non-GMO and non-poligeenan.

Where To Get Sea Moss?

We made a list of what to check before getting your sea moss. We hope this can be helpful for new buyers out there.

The color of natural sea moss is usually dark and has bits of salt in it. Some may even have shell particles attached to them. It is natural because it is from the sea. This is why we need to thoroughly wash our sea moss before adding it to our foods.

The right kind of sea moss is mostly hard and leathery-feel when it is naturally dehydrated. When it is rehydrated, natural sea moss will have a gooey and gel-like texture. Further dehydration can give you a powder version.

Finding an all-natural powdered sea moss may be a challenge because of the process of powdering sea moss. It is not common, but it is available. You just have to thoroughly examine the product.

Before adding it to your cart, check out first where it is sourced. A wildcrafted sea moss is the best type because you can be sure that it is a non-GMO kind of sea moss. Some sea moss, due to popular demand, is grown in pools. Sea moss may be induced with growth factors so that they can promulgate faster. You can check out more details about sea moss sources here.

After harvesting the sea moss, check out how the company prepares your sea moss. Do they bake or cook it to dehydrate it, or do they use a dehydrator? Ask these questions before purchasing one.

Check out Earthbal’s sea moss. It is wildcrafted from the Caribbean and is naturally prepared. It is not baked. It is also well packaged that it can last you a long time.

We can use sea moss in almost anything. From food to skincare to even hair care. The use of sea moss is very versatile. [1]

How To Use Irish Moss Powder?

Sea moss powder is usually made from dried sea moss. It is processed to dry it further so that it can be made into its powdered form.

How to use Irish moss powder?

Naturally, powdered sea moss can retain its raw nutritional value. Although there is a risk of developing poligeenan and D-carrageenan if they are subject to too much heat and harmful chemicals.

How to Use Irish Moss Powder as a capsule? The capsule version of sea moss is the cheapest form of sea moss in the market. It is mostly used as a food supplement because it is packed with vitamins and minerals. If sea moss is processed correctly, all of its raw nutrition is preserved even in capsule form.

How to Use Irish Moss Powder as a face mask? Sea moss powder can be mixed in natural ingredients like aloe vera gel and coconut oil to be applied to the face. Using sea moss as a face mask helps cleanse the skin because of its antibacterial property. [2]

How To Use Sea Moss Gel?

Sea moss gel is the best type of sea moss to get for universal uses. Sea moss gel is very easy to make. You don’t have to buy those expensive ready-made gel. You just grab a good quality whole sea moss like the one sold in Earthbal, then make it into a sea moss gel. You can get a good sea moss recipe from here.

Sea moss gel can be used as:

Sea moss gained popularity recently because of Kim Kardashian’s sea moss gel smoothie. You can add 2- 4 tbsps of sea moss in your refreshing smoothie to make it more nutritious than ever!

Sea moss gel has a gooey-jelly like texture. If processed well like how Earthbal. Their sea moss gel recipe has a minimal fishy smell and creamy jelly texture. It is best used as a fruit jam base to have that rich, creamy texture.

Sea moss gel has recently been discovered to be a great face mask. It has a rich antimicrobial property that helps clean the face. It also has an anti-inflammatory property, which serves as a natural remedy for unwanted puffiness. Constant use of sea moss significantly cleared skin for most users.

Sea moss gel can be used as a deep conditioner. It is mixed with coconut oil or shea butter; sea moss can improve your dull and dry hair. With the regular use of sea moss, you can observe better hair elasticity.

How to use Irish moss powder? Sea moss is a nutrient-rich superfood. It is a whole food and mostly gluten-free. The use of sea moss is very versatile. Because of its great nutrient-filled property, sea moss can improve both the body’s internal and external metabolism. Constant use of sea moss will indeed benefit its user.

Just make sure to consult your doctor first before using it to prevent unwanted allergies or side effects.