How To Make Sea Moss Gel: 5 Awesome Ways to Use It 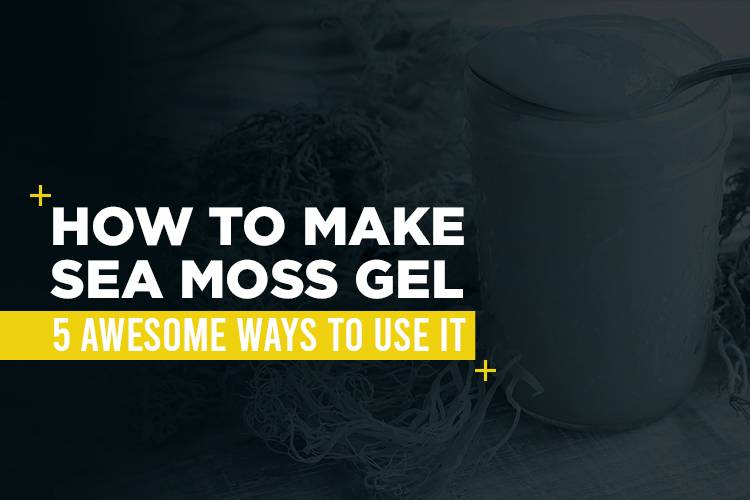 How To Make Sea Moss Gel: 5 Awesome Ways to Use It

How to make sea moss gel? Sea Moss is a gelatinous plant when cooked. It is filled with carrageenan, a natural substance that makes sea moss have a  thick jelly-like texture. Because of the organic thickening property of sea moss, it is usually used in household meals such as in soup as a base. There are still many uses of sea moss, especially sea moss gel. Many of which are for a food additive or topical use.

Before diving into how to make sea moss gel or the uses of sea moss, there must be an understanding of what is a sea moss to better comprehend what can be done to it.

Sea moss is an ocean superfood that has been popularized over the years because of Dr. Sebi. It is labeled as a superfood because of its limitless benefits. The benefits of sea moss can surely benefit the whole body, from the tip of your hair to the tip of your toenails, literally.

Sea moss can come in many different species or forms but the popular and most studied varieties are the Sea Moss from the Caribbean and the Irish sea moss. Both sea mosses are local to the shores of the Atlantic Ocean.

They both fall into the category of red algae and are highly nutritious. Aside from being a superfood, sea mosses are recommended for the whole foods diet because of its organic property. Sea moss, especially sun-dried or naturally processed sea moss, has preserved almost all of its nutrients. Besides, the vitamins and minerals found in sea moss are essential to the body.

By essential, this means that the body needs this to function properly but the body cannot produce enough of it thus, a dietary supplement is necessary.

Aside from the criteria of preparation, it is also important to know the source of the sea moss. Synthetic sea moss can cause more harm than any benefit that can be gained from it. Synthetic sea moss and those processed under extreme heat can develop harmful elements like poligeenan and degraded carrageenan which are harmful to the body, especially if taken long-term. Unlike synthetic sea moss,  Earthbal has the best-wildcrafted sea moss. It is sourced from the best environment in a marine reserve and prepared most naturally.

Several pieces of research are still being studied to further investigate the advantage and disadvantages of adding sea moss to the diet. Currently, here are some of the important nutrients that sea moss can give to the body.

Out of 102 micronutrients needed by the body, 92 of them are found in sea moss. Having 92 trace minerals in the diet is very helpful to the maintenance of the body. To be able to get 92 out of 102 is already a big relief because you basically, almost meet your daily nutritional needs without having to think so much of how to meet them. With 92 trace minerals found in sea moss, good absorption of other nutrients is also facilitated.

Essentially, because of its rich in collagen property sea moss is very helpful in keeping the skin healthy. Collagen is responsible for maintaining the elasticity of the skin and connective tissues,  making the skin and hair look younger and fuller. It also helps in maintaining bone health. [2] It is packed with a good number of collagen that is a primary source of dietary collagen for a vegan diet. A natural sea moss made into a gel is a very good topical gel for soothing and hydrating skin. How to make sea moss gel? Earthbal secret recipe is included in this article.

Fucoxanthin is a fat loss non-stimulatory agent. It is a compound that helps regulate fat building in the body. It enters the cell of the body and stays there until the body needs it. By being in the cell, it induces fat loss by stopping the cell from turning into storage fats.  It also stops the body fats from proliferation. Further, fucoxanthin is helpful in glucose maintenance in the muscles. That helps prevent diseases like diabetes.[3] Sea moss has a good amount of fucoxanthin in its components. [4]

Ocean plants and seafood are known to contain a good amount of iodine. Sea moss, a popular ocean plant is very rich in iodine. Iodine is a necessary micronutrient to aid the function of the thyroid gland. It is the main ingredient in the production of thyroid hormones that are needed so the body can have a coordinated function and the brain will be healthy.

However, iodine should be taken in moderation. Iodine in sea moss is a good natural remedy for hypothyroidism but taking too much may also trigger hyperthyroidism especially for people with familial risk. Here is a quick guide to how much iodine one should consume according to their life stage.

It was researched that a hundred grams of sea moss have an estimated 68% of the RNI. Iron is very important to the body because it is needed by the blood. Without iron, the blood cannot deliver oxygen to the different parts of the body. With the lack of oxygen in the body, disease like anemia can develop. Iron is very important to have a normal flow of nutrients too. Never neglect the iron requirement in the body.

In a hundred grams of sea moss, 41% of the RNI of an adult is met. Magnesium may not be as popular as iron but it is a necessary element to more than 300 enzyme functions in the body. The majority of these enzymes are needed for muscle functions.[5] aside from that, magnesium affects the overall nerve function because of its effect on the message passing. Likewise, it helps regulate blood pressure through its effects on the heart.

While everybody is more aware of Vitamin C, vitamin B is as important as vitamin C. It is especially important for pregnant women because vitamin B is necessary for the development of the baby in the womb. Vitamin B is used by the body to break down proteins, carbohydrates, and fats in the body. Several chemical or metabolisms in the body requires vitamin B in the form of Folate (Vitamin B9) and Riboflavin (Vitamin B2).

Lastly, Vitamin C is essential for the absorption of almost anything in the body. The cells of the body are made up of lipid bilayer, which means water-soluble cant go in the cell while fats can. Vitamin C is important in helping the compounds enter the body. While collagen is rich in sea moss, vitamin C helps this collagen be absorbed more efficiently. In 100 grams of sea moss, you more or less have 3.0 mg of vitamin C. [6]

Aside from Vitamin C, there is also ZInc which plays an important role in the immune system. Several researchers claim that zinc deficiency can lead to a lack of attention, weak immunity, allergies, thinning hair, and even leaky gut. Sea moss has a good amount of zinc, plus it is highly recommended to take zinc in a dietary way because it is the best way to absorb it.

After knowing the properties of sea moss, it is easy to summarize the benefits of sea moss to the body.

When the body has enough thyroid hormone, the mind is more alert and mental function is more efficient. Muscle coordination is on point too. Aside from this, a healthy thyroid can mean a healthier body and metabolism

The thyroid is also helpful in maintaining heart health. This is why hypothyroidism can cause irregular heart rhythm and palpitations. The nutrients of sea moss also support the function of the heart such as magnesium, iron, and zinc.

A healthy thyroid means better metabolism. It helps the body burn enough fats so that lower build-up happens. There is also the support of fucoxanthin and probiotics in sea moss that supports body metabolism.

With better thyroid, the immune system is also at its optimal because of the hormone it produces. Likewise, with the help of zinc and other micronutrients such as iron, gas exchange is more efficient. Transport also happens effectively.

When the body is healthy, the skin and hair radiate it. With the rich amount of collagen, vitamin C, and a thyroid gland in a good condition, the body’s skin and hair are expected to be glowing. Sea moss is very helpful in revitalizing the body. Many use sea moss as a gel rather than taking it in powdered form.

It s micronutrient helps the body absorb collagen to the body even when used topically. It is also helpful in soothing sunburns because of its cool gel property. Given this, isn’t it exciting to know how to make sea moss gel?

While many articles have discussed how to use sea moss, there seems to be little about how to make sea moss gel and how to use it.

There are top 5 uses of sea moss gel.

How to make sea moss gel is fairly easy, you just need a good quality sea moss and a few other ingredients.  To show how easy it is, continue reading and see the amazing Earthbal secret recipe that not only makes an awesome sea moss gel but also removes the fishy smell of sea moss

Before going into the recipe on how to make sea moss gel, it is quite good to know a few uses of sea moss to proportion how much sea moss gel to make. [7]

Most sea moss gels are used as household food thickeners. Because of its natural thick jelly-like texture, sea moss is popular to be added in soups and even in pastries. If processed properly, sea moss can be tasteless and odorless, which is a perfect food additive. Another secret is that sea moss has very little calories, so adding it to any food is far better than using cornstarch or flour.

Another food-related use of sea moss gel a smoothie base. This is quite popular with vegan diets because of its thick texture, just add few cold fruits and you get your good, healthy, and tasty whole food smoothie! Berries and fruits are the best smoothie partner of sea moss. [8]

Is shake not a smoothie? Yes, they are slightly different. A shake is much creamier than a smoothie. The flavors for shakes are usually paired with a milky base like chocolate, caramel, and the like. Although it has a milk base, shakes are as thick as a smoothie. A shake with a sea moss gel has the best texture because it is thick, sweet, and creamy. It can be said that it borders an ice cream texture.

After the edible uses of sea moss gel, a hair mask is another popular use of sea moss. It has a collagen property that helps rehabilitate hair especially damaged hair. A good hair spa with sea moss gel can revive life to any fuzzy hair.

Another popular use is by using sea moss as a face mask. Many people observed that topical use of sea moss especially as a face mask helps the face have a brighter and glowing look. When a face mask is used regularly, it can also help clear out some impurities. Aside from the collagen found in sea moss, sea moss also contains a good amount of anti-bacterial property which helps clear out the skin without drying it out. [9] Are you excited to know how to make sea moss gel?

How To Make Sea Moss Gel