3 Shocking Questions You Need To Ask: How Much Sea Moss To Take Daily Dr Sebi 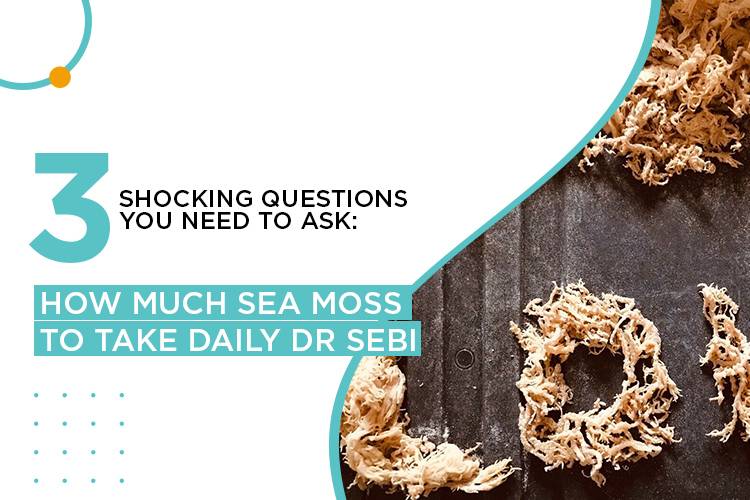 3 Shocking Questions You Need To Ask: How Much Sea Moss To Take Daily Dr Sebi

How Much Sea Moss To Take Daily Dr Sebi? Sea moss is taking over the whole foods department in America. It has been trending for a period because of many personalities using sea moss. And, of course, because of its undeniable benefits.

Its sudden boom in the market may seem like a fad for many, but in fact, sea moss has been incorporated into our daily foods since forever. Only that sea moss is being used in different forms.

Another contributing factor for sea moss’s stardom may be attributed to Dr. Sebi. He is a naturalist who advocates the use of natural remedies to promote a healthier life. Sea moss was his prime natural food because of its never-ending benefits.

Sea moss for Dr. Sebi is a natural cure for all diseases. The naturalistic approach that Dr. Sebi followed refers to the way of treating ailments without the use of pharmaceuticals drugs or only just using natural ingredients.

This was how sea moss took over the market. Dr. Sebi claimed that sea moss was the natural remedy for any type of disease, including AIDS.[1]

You might be here, reading this article because of Dr. Sebi’s hype before, which garnered a considerable amount of attention for sea moss.

And one of the positive things about the hype made was that sea moss has been more thoroughly studied, including its components, vitamins, and minerals. There also have conclusive studies on its benefits.

Many people were also able to share their experiences with sea moss online.

Through this, we can discover that sea moss is not new to the western hemisphere. It has been a food for the Irish and Jamaicans since the 19th century.

You can harvest more ideas on sea moss on the internet because more people have become aware of sea moss.

How Are They Harvested?

An excellent sea moss-like those sold in Earthbal are wildcrafted. When looking for sea moss to buy, you should consider how it was harvested and planted. There is sea moss grown in pools with a controlled or artificial environment. This type of sea moss can be harmful to the body because it may contain altered chemicals.

You can read more here.

The best type is wildcrafted sea moss because it is left to survive in its natural habitat until harvest. It is guaranteed to be non-GMO and gluten-free.

How To Prepare Sea Moss?

When you have your sea moss, you can now think of things you can make. Sea moss is a very versatile material. It can be eaten as it is, cooked with soup or pastries, mixed with smoothies, and shake. There are many things to do with sea moss.

But the most basic form and the easiest to manage is making the dried sea moss you bought from Earthbal into a sea moss gel.

Stored your sea moss in the fridge for as long as 2 weeks in an airtight container and 4 months in the freezer.

Read more: 2 Best Ways On How To Prepare Sea Moss.

Preparing sea moss is reasonably straightforward. You only need a few ingredients.

After preparing the ingredients, it is time to make the sea moss gel used for anything. Yes, you’ve read it correctly, anything. Not just for foods but sea moss can also be used for the skin and hair. Because of its high level of nutrients, sea moss is very versatile to use.

Step 1: Prepare all the needed materials, including all the listed ingredients above, and a medium-size basin with a lead for overnight soaking.

Step 2: Clean Sea moss thoroughly. Sea moss may have shell debris. You don’t have to worry, that’s normal. You can just wash them off before you start soaking your sea moss.

Step3: you are ready to soak. Soak sea moss in the warm water (not boiled water) and stay for at least when sea moss is double its size.

Step 5: Blend sea moss until smooth. Texture may vary according to your preference.

You can find a more detailed recipe in Earthbal

How Much Sea Moss To Take Daily Dr Sebi

Now that you have your sea moss gel, it is time to know where to use it, and how much sea moss to take daily Dr Sebi. Dr. Sebi has not established any specific amount of sea moss daily. Still, the recommended sea moss intake is 2 to 4 tbsp per day because of its iodine content.

Take note that sea moss quantity may vary depending on the age or on specific nutritional specificity—for example, a pregnant woman.