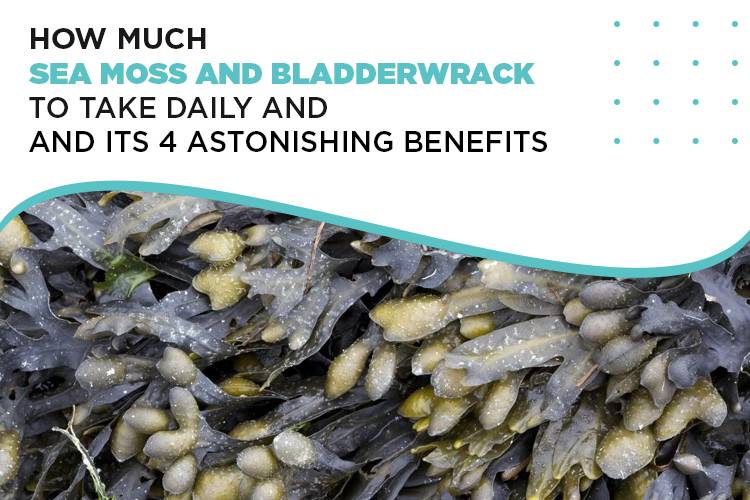 How much sea moss and bladderwrack to take daily? Many health-conscious would ask this question because being told to eat something beneficial is not something that can immediately ring healthy. Being cautious is more than just knowing if the food contains the benefits you need and how much the body can take in.

Although healthy foods, especially whole foods, can provide nutrients to the body, the body also has a specific limitation. For example, iodine, too little or too much iodine in the body can negatively affect the thyroid. Such that the body can have thyroid problems like hyperthyroidism or hypothyroidism.

It is justifiable that many people would ask the question, “how much sea moss and bladderwrack to take daily?” because it is essential to know this.

There may even be confusion when referring to Dr. Sebi’s sea moss. All sea moss is closely related. They have similar benefits and properties and may only vary in physical properties like their leaves or stem.

Read More: 2 Types Of Irish Moss? Know Which One Dr. Sebi Is Referring

Before asking, “how much sea moss and bladderwrack to take daily?”, ask first what is this food.  There is nothing wrong with knowing the specific scientific profile of the food being eaten anyways.

Sea moss is also gaining popularity because aside from being a good source of iron and zinc, sea moss is also rich in collagen protein. It is also a popular wholefood. Sea moss is also being studied as the new ocean superfood because of its benefit to the body and the environment.

What Is An IRISH Sea Moss?

The most popular sea moss today is the Irish sea moss. It is the sea moss harvested from the rocky shores of the Atlantic. Irish sea moss has a long history. Its name came to be because the Irish people were the first to harvest and eat this sea moss in that part of the world.

In the long run, Irish sea moss became one of the household items. It was then that Irish sea moss was also brought to colonies in the Caribbean, like in Jamaica.

What Is A Bladderwrack?

Bladderwrack may also be known as thallus 2. Bladderwrack is more popular as a medicinal plant than other sea moss that dominates the whole foods category. It is a popular alternative medicine for gastritis, constipation, GERD, and wound healing.

Although it is traditionally used, there are still limited facts regarding any therapeutic claim on Bladderwrack. With this, taking bladderwrack should be in an appropriate amount or according to the professional’s suggestion. It is very reasonable to ask, “how much sea moss and bladderwrack to take daily?”

Bladderwrack is rich in dietary fibre. It is known to contain a good amount of alginic acid which benefits the Gastro-Intestinal Tract (GIT). Traditionally it is used to relieve constipation and even treat diarrhea. Alginic acid is a natural sweeper of the intestines and helps the intestines in their absorption.

The same fibre contains sodium alginate, which is an ingredient to treat heartburn. One fantastic factor about bladderwrack is it is alkaline, and it helps maintain natural pH levels in the body. With this,  It has the capability to alkalinized stomach acidity which causes heartburn.

Although limited research has been done with bladderwrack, some claims have scientifically supported it.

Thyroid function is known to function in relation to the iodine levels. The primary precursor of thyroid hormones is iodine. Thyroid hormones affect the brain and muscle coordination. These hormones are also related to neurologic development.

Getting enough Iodine from the diet is essential to keep the thyroid running. Note, enough, not too much, not too little. Taking too little iodine can cause iodine deficiency, which can lead to hypothyroidism. Hypothyroidism is an autoimmune disease that can lead to weight gain and increased sensitivity to cold, among others. Taking too much may also lead to hyperthyroidism, which can also lead to some other diseases. 3

Bladderwrack, like Irish sea moss, is very helpful in wound healing and skin revitalizing. Sea moss, in general, is rich in collagen protein, which is beneficial for skin health. Specifically, bladderwrack contains fucoidan is a compound that helps in the development of collagen in the skin.

Collagen synthesis is essential for skin aging and burns. Using bladderwrack as a topical treatment is also found to treat some skin issues. It has an excellent antibacterial effect and anti-inflammatory effect that helps maintain skin health.

Bladderwrack also contains a good amount of antioxidant that slows down the breakdown of collagen in the skin. It helps the skin retain moisture and slow down the ageing process.

Bladderwrack contains a good number of antioxidants. And antioxidants in bladderwrack are not for the skin but the overall body. Antiviral, protect the body from free radicals that may harm the body. Free radicals are the main culprit of tumor formation.

How Much Sea Moss And Bladderwrack To Take Daily?

Sea moss, as in Irish sea moss is recommended to only take 2-4 tbsps per day because of its high iodine content which can be harmful to the thyroid gland. However, topical use, especially for bath scrubs and hair treatment has no specific limit. The more sea moss the better.

While Bladderwrack has a more specific recommendation because it is more medicinally related, according to most claims, it is appropriate to use bladderwrack one teaspoon three times a day. That is if it is taken with water or added to other solutes. 5

Above all the suggestions, it is still more advisable to check with the doctor. Further, different sources will have different iodine content it is also better to be knowledgeable of the specific iodine content. A normal adult should not take more than 150 mcg of iodine per day.

Enjoy right foods but never forget to ask “how much can I take in?”  or, in this case, “how much sea moss and bladderwrack to take daily?”