2 Best Ways On How To Prepare Sea Moss 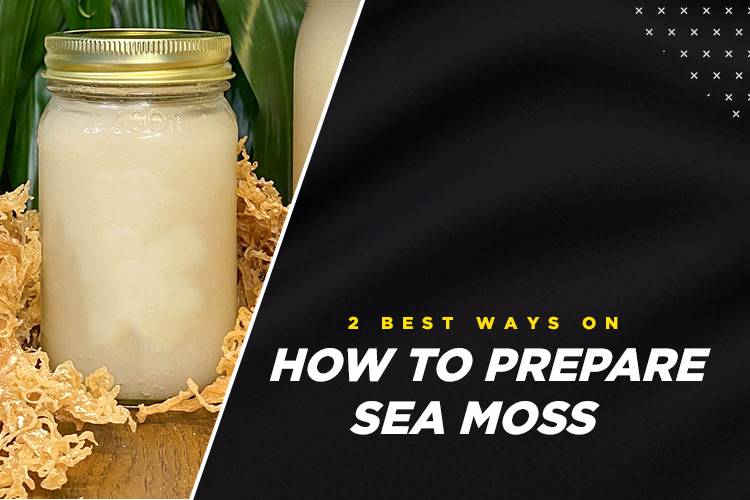 2 Best Ways On How To Prepare Sea Moss

How to prepare sea moss? Sea moss is a trending ocean food. One because of Dr. Sebi, a naturalist that promoted sea moss as a superfood that can revitalize the cell. It can also help improve bone strength. Sea moss is said to be the best source of nutrients for intracellular cleansing.

Another is because sea moss is a superfood. It has tons of benefits that other ocean foods do not have. Plus, sea moss is very easy to prepare. It is also very versatile in usage.

Sea moss is rich in vitamins and minerals especially iodine. Iodine is an important nutrient for the thyroid to function properly.

Without iodine, the thyroid cannot produce enough hormones to support the function of the muscles and the brain. The hormones produced by the thyroid gland are called triiodothyronine and thyroxine. These two hormones are necessary for muscle coordination. These two are also essential for mental function. Without these two, memory and other mental function can be affected.[1]

With better thyroid function the body also develops an efficient metabolism. It burns the things it should digest and retains the necessary nutrients for the body to actively function.

Aside from better thyroid function, sea moss also provides a large number of micronutrients to the body. It has 92 trace minerals out of 102 needed by the body. Given this, the body is fully fueled by the necessary nutrients.

More so, sea moss is packed with probiotics which is the food for the good bacteria in the gut. With probiotic and active digestion, good quality digestion and nutrient absorption happen in the gut.

What’s more, sea moss also has this compound called fucoxanthin which helps regulate fats in the body. It is stored in the fat cell and activates when necessary. It helps burn down fats build-up in the abdomen.

The cascade of benefits of sea moss such as healthy thyroid and fully-functional metabolism can greatly contribute to improving the body’s immunity.

Sea Moss has a natural antioxidant property. With a healthier thyroid, the mental situation of the body is more relaxed. In addition, the body is well provided with proper nutrients to fight off any abnormalities. Thus, the organs of the body are essentially more productive and effective.

A study suggested that sea moss can alleviate symptoms of Parkinson’s Disease. Although still early to total claim therapeutic conclusion, sea moss posts a promising use in the pharmaceutical field especially as a neurodegenerative drug for humans. [2]

Sea moss is not just iodine-rich, it is also filled with a good amount of collagen. Paired with vitamin C, collagen in sea moss is especially well-absorbed by the body. It helps revitalize the skin and hair.

Collagen is responsible for the quality of the skin. Many people use sea moss as a face mask and observe significant changes after a few days. Dietary intake of sea moss also provides a good outcome in making the skin healthy. With the excellent combination of collagen, vitamin C, and vitamin A, healthy glowing skin is guaranteed. [3]

What Are A Different Kind Of Sea Moss?

There is a rainbow of a variety of sea moss all over the world. From Red to Violet, even brown. A species of sea moss can be found anywhere in the world but what makes them different from each other is that each type of sea moss has a different carrageenan quantity.

There is also a difference in the structure and firmness. While some sea moss may be leafier some have less and rather has more stem in its structure.

Each species of sea moss also varies in color depending on how and where it is grown. Like Irish moss mostly have golden color but other Irish sea moss can grow with dark brown, caramel-like colors. It can even become purple. It is still distinguishable from the Jamaican sea moss because of its leaves’ quality.

But still, the sea moss plant is a superfood because it is packed with an excellent amount of nutrients.

Most if not all, of the species of sea moss, has a significant amount of nutrients. They may only vary by minute quantity.

What is important is that the sea moss you are buying is fresh or naturally packaged, and not synthetic.

Side Effect Of Sea Moss

People with familial history of hyperthyroidism should be more vigilant in the amount of iodine taken.

This is like eating junk foods, just calories with no nutrients. Always get fresh or sundried sea moss.

How To Prepare Sea Moss

It helps in deciding if boiling or soaking will be the method of choice.

If preferred, head to the end of this article to see the best recipe on how to prepare sea moss. The recipe is popular because it is odorless and fresh tasting.

Among the many ways to prepare sea moss, the best way is either to boil or to soak it overnight. Know which method to use according to your preference. [4]

Things to consider when choosing how to prepare sea moss:

Boiling sea moss takes a shorter time for it to double in size and be more gelatinous. Boiling sea moss is a more traditionally used method by the Jamaican. They boil sea moss with some spices to the sea moss. By doing so, the sea moss absorbs the flavor of the spice and at the same time loses its strong smell.

How to prepare sea moss by boiling:

Although the downside of this method, according to the belief of many, is that boiling sea moss actually subjects sea moss to high heat that may alter its chemical properties. By doing so, some nutrients may be lost in the process.

Another way on how to prepare sea moss is through soaking.

Soak is a more conservative way of preparing sea moss. This way allows almost all the nutrients to be conserved because it does not undergo any heating process. Soaking is literally just rehydrating the sea moss back to how it was before it was dehydrated.

Soaking sea moss has a more firm texture than boiling it. The level of firmness also varies depending on the amount of water and the length in which the sea moss is soaked.

Before going into business, remember to find the correct ratio of water and sea moss in order to get the best consistency.

Using this method of preparing sea moss takes a long time.  Soaking can take 24 hours to 72 hours depending on the preference.

How to prepare sea moss by soaking:

Whether to soak or to boil the end result is a sea moss gel. It is recommended to keep the sea moss gel in an airtight glass container to keep its freshness.

It is recommended to just take 1-2 spoonfuls of sea moss daily because of the high iodine content.

There are literally hundreds of recipes that can be made using sea moss gel.

Sea moss is vegan food. It is actually a popular additive for vegan baked goodies and drinks. Sea moss is a healthy thickener for soup too. Most households use sea moss to naturally thicken their soup and sauces.

Further, sea moss is also kosher and gluten-free. It is all-natural.

What is great with sea moss is that eating it is almost guilt-free. When eating sea moss as is, or as a food additive, there is no worry or guilt attached to it because sea moss is very low in calories. It is even classified as a low energy density food because sea moss contains a lot of water and few carbohydrates.

Sea moss is a general term for the ocean superfood. There are hundreds of sea moss all over the world. All of which are very nutritious to the body. However, the amount of sea moss taken daily should be regulated as hyperthyroidism can occur.

Sea moss is a great item to add to the diet. It has many benefits with few side effects (which can also be avoided). Sea moss is an excellent food additive for many recipes including soups and sauces.

While it is more popular as a soup base, sea moss can also be made into a smoothie. It is basically not that fishy against popular belief. The point is sea moss has limitless potential. It is also easy to make. You can have it soaked or boiled.

It is simply a cheat to having a satiating meal without the fear of gaining large calories.